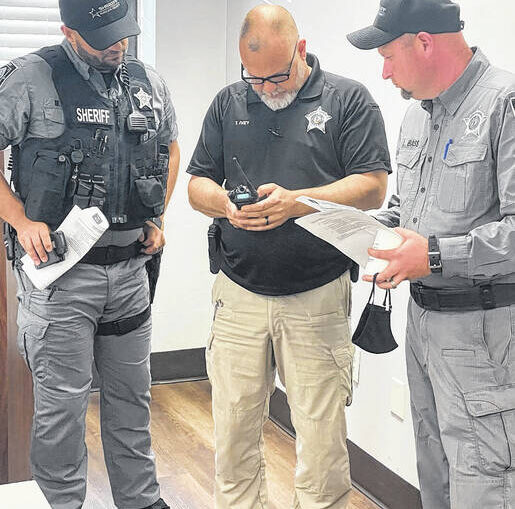 Training began earlier this the month for body camera operations. The cameras will record footage that will be “downloaded each time a deputy arrives at the sheriff’s office,” according to a prepared statement released Friday by the Sheriff’s Office. Footage can be used as evidence in court and for training purposes.

Officers continued to train this week, but will officially put the 75 Motorola/WatchGuard body cameras to use Monday, according to Robeson County Sheriff Burnis Wilkins.

“More cameras will be purchased as funding allows,” according to the Sheriff’s Office.

“Body cameras will benefit both the officer and the public,” Wilkins said. “I am a proponent of body camera usage as it holds us accountable and is in the interest of transparency thereby providing an extra layer of protection to the men and women in uniform and the public.”

Deputies will not record footage of “casual conversations” or breaks, and will not be compelled to tell the public when recordings are underway, according to the Sheriff’s Office.

“The sheriff’s office will also begin a full transition to the state VIPER system on Monday. The North Carolina Voice Interoperability Plan for Emergency Responders will allow deputies to communicate with all other first responders in and outside of the county and beyond in the event of a large scale emergency. This has been a phased in plan with the assistance of funding from multiple sources,” Wilkins added.

Wilkins said the Sheriff’s Office has hundreds VIPER devices including handheld and car radios to help it integrate into the system.

The Sheriff’s Office was given about 50 radios in February as part of a mandatory upgrade effort to comply with the statewide communication system, Emily Jones, Robeson County’s Public Information officer told The Robesonian at the time. The radios were among 140 radio systems purchased by Robeson County government for $571,876.22.

The county’s purchase of those radios installed in February was its effort to upgrade its system, which it planned to do in phases, Robeson County Manager Kellie Blue told The Robesonian in February.

“Interoperability is a serious, pressing public safety problem that severely undermines the capacities of law enforcement, firefighters, and other first responders to respond to and manage emergency situations,” said Crystal Batton, assistant director for Robeson County 911.

“We are working on upgrading our body cameras and all of our technology through various partnerships and grant programs,” said Maxton Chief of Police Na’Shayla Nelson.

Jon Edwards said the Fairmont Police Department has been using body cameras since he took the reins of the department in 2016.

Cameras were “one of the first purchases I made,” Edwards said.

The Pembroke and Rowland police departments are looking into the use of body cameras with hopes to purchase and implement them in the future, according to the departments’ police chiefs.

“We have talked about it,” said Edward Locklear, Pembroke chief of police. “[I]t is something that we are planning to work on.”

Rowland Chief of Police Hubert Graham said the department is “inquiring about some.”

Maxton, Fairmont and Lumberton police departments have upgraded to the VIPER system.

Fairmont police have been using the system for about four years, according to Edwards.

“[W]e switched to that system as our primary communication system then,” Edwards said in a statement.

The Lumberton Police Department does not have body cameras, but is waiting for VIPER radios to come in, said Lumberton police Capt. Terry Parker on Friday.

The Rowland Police Department will look for funding sources for those upgrades in the next year, according to Graham.

Red Springs Chief of Police Brent Adkins said in the next year or two he hopes to acquire VIPER radios for his department.

“We’re trying to get a grant for those,” Adkins said.

“Everything is expensive and, you know, it’s an expensive transition (to the new system),” he said.