On July 6, Uber and Postmates announced that they had reached an agreement for the ride-share company to acquire Postmates for $2.65 billion in an all-stock transaction.

“Uber and Postmates have long shared a belief that platforms like ours can power much more than just food delivery — they can be a hugely important part of local commerce and communities, all the more important during crises like COVID-19,” Uber CEO Dara Khosrowshahi said in a news release. “We’re thrilled to welcome Postmates to the Uber family as we innovate together to deliver better experiences for consumers, delivery people and merchants across the country.”

This multibillion-dollar acquisition is just one of several big money moves businesses have made this year.

In late June, Amazon announced that it had reached an agreement to buy Zoox, a California-based company pioneering autonomous ride-hailing vehicles.

“Like Amazon, Zoox is passionate about innovation and about its customers, and we’re excited to help the talented Zoox team to bring their vision to reality in the years ahead,” Jeff Wilke, Amazon’s CEO, Worldwide Consumer, said in a news release.

Facebook acquired GIF database Giphy in mid-May to make it a part of its Instagram team. Prior to the acquisition, the Giphy platform had already been integrated with Instagram, the Facebook app, Messenger and WhatsApp.

“We see the positivity in how people use GIPHY in our products today, and we know that bringing the GIPHY team’s creativity and talent together with ours will only accelerate how people use visual communication to connect with each other,” Vishal Shah, VP of product at Facebook shared in a company blog post.

“Supporting businesses of all sizes with best-in-class solutions is in Verizon’s DNA,” Tami Erwin, CEO of Verizon Business, said in a news release. “BlueJeans is a phenomenal product that offers the security and scalability that are imperative to our customers, and we’re eager to amplify their reach across our global network.”

In February, Morgan Stanley and E-Trade announced that they had reached a “definitive agreement” under which Morgan Stanley would acquire E-Trade in an all-stock transaction valued at approximately $13 billion.

Morgan Stanley chairman and CEO James Gorman said in April that the acquisition will help the bank’s revenues be less impacted by market downturns.

“It provides more balance to our business model,” he told CNBC. “It’s more wealth management revenue, it’s more stability, it’s less volatile than the core markets business. So net-net, I’m happier now that we did the deal [than] when we did it.”

Zoom’s popularity reached new heights thanks to the coronavirus pandemic, as people searched for new ways to work — and socialize — remotely. Unfortunately, the company experienced some growing pains as security issues kept popping up. To help address these issues, Zoom acquired the encryption-focused startup Keybase in May for an undisclosed amount.

“This acquisition marks a key step for Zoom as we attempt to accomplish the creation of a truly private video communications platform that can scale to hundreds of millions of participants, while also having the flexibility to support Zoom’s wide variety of uses,” founder and CEO Eric S. Yuan said in a company blog post.

SoFi announced in April that it reached an agreement to acquire Galileo Financial Technologies, a financial services API and payments platform, for $1.2 billion in cash and stock.

“Together with Galileo, we will partner to build on our companies’ strengths to drive even greater financial technology innovation, making those products and services available to both current and future partners,” Anthony Noto, CEO of SoFi, said in a news release.

Intuit — the maker of TurboTax, QuickBooks and Mint — announced in February that it had agreed to acquire consumer technology platform Credit Karma for approximately $7.1 billion in cash and stock.

“By joining forces with Credit Karma, we can create a personalized financial assistant that will help consumers find the right financial products, put more money in their pockets and provide insights and advice, enabling them to buy the home they’ve always dreamed about, pay for education and take the vacation they’ve always wanted,” Sasan Goodarzi, CEO of Intuit, said in a news release.

In January, Visa announced that it would be acquiring Plaid, a network that enables people to securely connect their financial accounts to apps like Venmo and Acorns, for $5.3 billion.

“The acquisition, combined with our many fintech efforts already underway, will position Visa to deliver even more value for developers, financial institutions and consumers,” Al Kelly, CEO and chairman of Visa, said in a news release.

Although T-Mobile and Sprint announced their merger deal in 2018, it wasn’t completed until April of this year, NPR reported. The new company, just called T-Mobile, is now the third-largest wireless company in the U.S. behind AT&T and Verizon.

The merger was initially met with pushback from several states and consumers, who worried that the consolidation would stifle competition and raise prices. The deal was approved by the Department of Justice last summer and by the U.S. Federal Communications Commission in the fall.

Big Problems: These Are the Most Unstable Industries in the US Right Now

SoftBank announced in April that it had terminated a $3 billion tender offer for WeWork shares held by other stockholders “because certain conditions to the tender offer were not satisfied,” the company said in a news release. According to the release, the unfulfilled conditions included the failure to obtain the necessary antitrust approvals by an April 1 deadline and the existence of “multiple, new and significant pending criminal and civil investigations that have begun since the MTA was signed in October 2019, in which authorities have requested information regarding, among other things, WeWork’s financing activities, communications with investors, business dealings with Adam Neumann, operations and financial condition.”

In response to SoftBank’s decision, WeWork’s board said it would be considering “all of its legal options, including litigation,” CNBC reported.

Berkshire Hathaway chairman Warren Buffett said during Berkshire’s annual shareholder meeting in May that his conglomerate had sold the entirety of its stocks in the U.S. airline industry. Berkshire had positions in United, American, Southwest, Delta Air Lines and other airlines that were worth upwards of $4 billion, CNBC reported.

“I think there are certain industries, and unfortunately, I think that the airline industry, among others, that are really hurt by a forced shutdown by events that are far beyond our control,” Buffett said during the meeting.

Selling off all its airline stock wasn’t the only big business move Berkshire Hathaway made this year. On July 5, Dominion Energy announced that it had agreed to sell all of its gas transmission and storage segment assets to Berkshire Hathaway in a transaction valued at $9.7 billion.

“We are very proud to be adding such a great portfolio of natural gas assets to our already strong energy business,” Buffett said in a news release.

Members-only healthcare provider One Medical went public in January with an IPO price of $14 and a valuation of $1.7 billion, Crunchbase reported. As of July 9, the share value had grown to $39.

Casper is another major brand that went public in 2020. The direct-to-consumer mattress company went public in February with an initial share price of $12, putting its valuation at $476 million, Crunchbase reported. CNN called Casper’s IPO a “disaster,” noting that the company was at one point valued at more than $1 billion. Since its founding in 2014, the mattress market has become more saturated, and Casper has struggled to rebrand itself as a “sleep and wellness” company.

This article originally appeared on GOBankingRates.com: Uber Acquires Postmates and 14 Other Biggest Business Moves of 2020

Sat Jul 11 , 2020
The pandemic has sent demand for commercial airline flights into a tailspin, but business is soaring for the private jet companies that fly corporate bigwigs and deep-pocketed travelers looking to wing away to an exclusive getaway. The trend demonstrates once again that the outbreak of COVID-19 is having vastly different […] 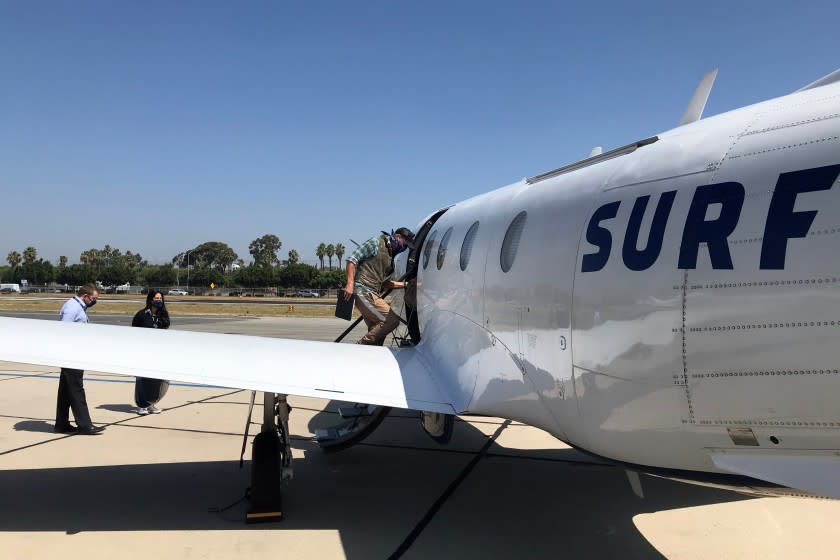 who invented the computer